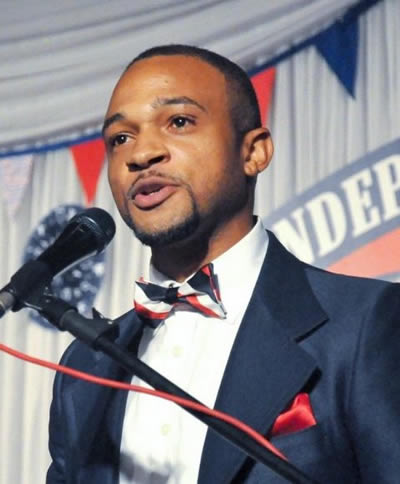 Calvin Hayes is a U.S. Diplomat who has traveled to more than 50 countries in the last decade. With international experiences ranging from Africa to South Asia to Latin America to the Middle East, Calvin has worked relentlessly to promote and defend universal human rights, bolster foreign investment to the U.S. economy, and build education and cultural linkages between America and the international community. He has served at the U.S. Missions in South Africa, Djibouti, Bangladesh, Colombia, Ecuador, Guyana, and Iraq.

Calvin speaks Spanish, Bengali, and is currently studying Arabic for his next diplomatic assignment to Amman, Jordan. He received his bachelor’s degree in Public Relations from Florida A&M University (FAMU) and his master’s degree in Public Diplomacy from American University in Washington D.C. While a student at FAMU, he served as Student Body Vice-President and was the winner of the National Oratorical Contest for Alpha Phi Alpha Fraternity, Inc.

He is married to former Miss FAMU Kindall “Sunshine” Hayes, his college sweetheart who he met while exchanging ideas on study abroad. Calvin and Kindall are the co-founders of The HayesXChange, a podcast and platform dedicated to sharing the experiences of people of color who have traveled overseas beyond the boundaries of tourism. They also founded Fourteenth, a passport initiative for high school and college students intended to increase diversity in study abroad opportunities.

Calvin is a proud 2006 graduate of Jones High School and an alum of the Delta Xi Lambda Chapter’s Young Men of Distinction Program. Calvin is a published author who enjoys golfing and distance running.

He believes in the mantra that in a decisive moment, you can either define the moment or let the moment define you. Calvin believes that we should all strive to define every moment of life.

The I.S. Hankins-F.A. Johnson Education Foundation, Inc. is a 501(c) (3) charitable organization that was established in March 1993, by the Orlando Alumni Chapter (Delta Xi Lambda) of the Alpha Phi Alpha Fraternity, Inc. in honor our belated Brothers I. Sylvester Hankins and Felton. A. Johnson. The purpose of the Foundation is to promote, support, and instill in youth the values of high educational achievement, leadership and community service. The Foundation provides academic development, personal development, leadership development and social development to young men in the Metro Orlando area through the Young Men of Distinction Male Mentoring Program (YMOD). The Foundation also provides funding for other educational and community service initiatives of the Delta Xi Lambda Chapter of Alpha Phi Alpha Fraternity, Inc.